A new champion enters the ring 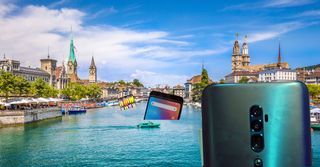 We're finally starting to see 5G phones make their way to Europe, after networks and phones became available in the US and South Korea in April, but the race to release the first 5G phone in Europe was a tight one.

In the end the top three contenders crossed the line in quick succession – the Oppo Reno 5G, Huawei Mate 20 X 5G and Xiaomi Mi Mix 3 5G all became available in Switzerland during May 1 and 2, however the winner was something of a surprise.

The phone that launched on May 1 was the Oppo Reno 5G, a phone from a brand that's not exactly a household name in Europe, despite being a very popular company in Asia. Many would have expected the title to go to Samsung or OnePlus, so Oppo stealing a march shows the brand is out to make waves.

The first 5G network in Europe came in Switzerland on April 17, when telecoms company Swisscom switched on its 5G network.

At the time there weren't any commercially-available 5G phones for customers to make the most of the improved connection, but that changed when the first 5G phone from Oppo launched in the country on May 1.

Competition wasn't very far behind, however – on May 2, Swiss network provider Sunrise made both the Huawei Mate 20 X and Xiaomi Mi Mix 3 5G available on its website, so the better-known companies had devices available too.

Whether those phones are technically available in Switzerland is a matter of debate, however – while you can pre-order them on Sunrise's website, there's no official release date provided, so Oppo may have more of a headstart in the European 5G phone market than people give it credit for.

Why is Oppo a surprise?

In the 5G phones race, Oppo is a bit of a dark horse, which is why we're surprised that it's bringing home the gold medal.

While Huawei and Xiaomi are relatively big names in Europe, Oppo has yet to really find a market and establish itself. It's only started operating in the continent within the last six months, despite (like Huawei and Xiaomi) being popular in China, it's home country.

Many eyes were on Huawei and Xiaomi's 5G contributions, but not as much attention was being paid to Oppo – in a way, it's a great underdog story.

To get the first 5G phone out, Oppo had to create special partnerships with both Swisscom, to get the 5G network running, and Qualcomm, for the special modems needed in the phones to facilitate 5G connectivity – and that must have cost a lot of money.

This shows us the company sees its 5G debut as an important part of its plan to expand in Europe, especially as the Oppo Reno is the first phone range it's giving a significant marketing push in Europe.

Since established smartphone brands like Apple have no plans for 5G phones that we're aware of, it seems like Oppo, and to a lesser extent Huawei and Xiaomi who must have also spent large amounts of money, are really banking on their 5G phones to upset the traditional smartphone pecking order.

The main competitor now for Oppo, Huawei and Xiaomi is Samsung, which could bring its Samsung Galaxy S10 5G with all the Galaxy S10 brand name hype – but each of the three Chinese smartphones sits at a price far below the Galaxy S10 5G, so combined with the buzz they'll receive for being first, they'll be attractive to the more thrifty consumer.

What does this mean for 5G Europe?

Oppo won the battle of being the first company to bring a 5G phone to Switzerland, but the war for 5G dominance of Europe has only just started – saying that, we can try and use the situation to speculate on the future of 5G in Europe.

Firstly, all three competing companies were Chinese manufacturers – while companies like these are gaining smartphone market share, 5G phones are where they could begin to really outpace the handset stalwarts we've been seeing from companies like Samsung and Apple.

Oppo's gold medal doesn't facilitate the rise of Chinese smartphones – that was happening anyway, but the first three 5G phones in Europe all being Chinese is an indicator of the changing influence that region is bringing.

In the UK many companies like Vodafone and EE are set to offer 5G by the end of 2019, and they'll likely be trying hard to be the first networks to offer cutting-edge handsets on their new networks.

This means exclusives: to try and outshine competitors, carriers will try to have as many exclusive handsets as possible, at least while there are few 5G phones on the market.

We're intrigued to see if it'll be these three phones that compete in each market when 5G rolls out to the rest of Europe, or if more companies will join the race – we know OnePlus has plans to be the first company to launch a 5G phone in the UK, an achievement other companies will try to steal.

When 5G was released in the US there was only one phone that worked on it, in the Moto Z3 5G; similarly when South Korea started its network the Samsung Galaxy S10 5G was the only phone customers could use on it.

However in Europe 5G is starting with not one but three competing devices, so the continent could be the battlefield in which the leading next-generation smartphone company is decided.

Most of the 5G phones we're expecting to see will be out within the year, so it looks like if a smartphone manufacturer can establish its credentials as a leader in the all-new 5G space, it can use this momentum to offer market-leading cameras, batteries and users experiences... if it can afford to outspend the powerhouses of Apple and Samsung.

Blog - The first 5G phone in Europe was unexpected - and here's what it means for you
Don't have an account? Sign Up